We are the investment risk!

Ende Gelände (Here and no Further) for lignite coal in Lusatia: climate justice in action!

In 2016, the farewell to coal continues: Vattenfall, owner of the coal field in Lusatia is trying to sell its German lignite coal branch. This is a unique chance to finally close down opencast pits and coal power stations and to show that it is possible to phase-out coal in a socially and ecologically responsible manner.

Yet, Vattenfall is only looking to sell: A new investor is supposed to carry on the centralistic, destructive energy system for decades to come. This deal would be the biggest investment in coal in the whole of Europe – meaning more resettlements, new power stations, pollution of drinking water and climate disaster.

Lusatia is an example of how climate politics are run at the moment: Everyone pretends to want the end of fossil fuels, yet no-one actually works on keeping them in the ground. Climate summits declare the transition to renewables and still the same governments effectively donate hundreds of billions of subsidies to the fossil fuel industry. The German government talks about climate protection – and spills gold on old power stations of RWE and Vattenfall. And Great Britain makes a big declaration on the farewell to coal – just to invest in fracking and nuclear energy. „Green growth“ is supposed to somehow make the difference.

We say: That’s enough! Do not sell, but rather put an end to coal – „Ende Gelände“! If Vattenfall wants to close its business in Lusatia just to leave the dirty job to someone else, we will put our foot in the door. And we will step on the toes of the leaders in current climate politics. For we can neither wait for nor trust in politics.

We will be standing where the diggers have to stop. We demand: End coal now! And we know: That’s manual labour. Hundreds of us will shut down the coal mining in Lusatia in a mass action of civil disobedience. Anyone, whether experienced in activism or not, can take part in the action – together we will stop the diggers. 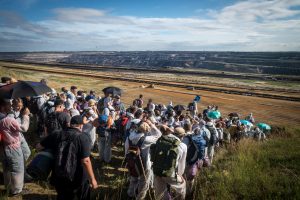 We have come to stay. Last year 1500 people entered the pit of a lignite coal mine in Rhineland. This year we are coming to Lusatia, where people have struggled against mining and resettlement for years. And we will send out yet another signal against the lignite coal madness! Even if our actions are not legal – they are by all means legitimate. As time is running out: If fossil fuels do not stay in the ground now, the catastrophic consequences for millions of people can hardly be avoided.

We are everywhere. The fight against lignite coal mining in German and Polish Lusatia is part of a global struggle. Around the world people are fighting against fossil fuelled capitalism. They are stopping coal power stations in India, pipelines in the US, coal ports in Australia, fracking in Brazil and oil drillings in Nigeria. While the global North is heating up the climate crisis, its countries can also still best adapt to it. In the global South, in contrast, climate change is destroying the livelihoods of millions of people. Many of them die on the borders of Europe. They fall victim to a racist border regime, aimed at keeping the consequences of climate change out. Fighting against the root causes of migration also starts in Lusatia. Climate justice now!

We want it all: the end of fossil fuelled capitalism! We are not just fighting against coal, against fracking and oil, but we fundamentally challenge the logic of profit and madness of growth. Based on these, wrong solutions such as market mechanisms, large-scale projects and the continued exploitation of the global South are being promoted. While a few energy corporations are thriving and pampered with subsidies, the same companies disconnect 350.000 households from power supply every year in Germany alone – pretending to their own employees that coal mining will continue forever. And yet, the staff is crucial for a just transition. We need a plan, as a society, how to organise and finance a social and ecological transformation – beyond the logic of capitalistic profit. We all carry the consequences of energy politics and so we all want to take part in decision making: We ask for a democratically organised energy supply!

We are the investment risk! Whoever buys the lignite in Lusatia will get our resistance as part of the package. The more we are and the bigger the protest, the less attractive the lignite, the cheaper the price and the less likely the deal. Nothing has been decided yet. Together we can stop the deal and make Vattenfall shut down the pit: The time for coal is over. So let’s enter the pit and increase the risk.

Keep up to date and subscribe to the newsletter!

Thank you! We subscribed your email address to the list.

If you get any post regarding Ende Gelände 2015, whether it is from the police, state prosecutor or RWE sollicitors: do not sign anything. If any of these bodies attempt to get in touch, do not respond. Please contact antirrr@riseup.net for advice on further steps